Growing up in Florida, I received an excellent school education in both Public and parochial schools. After High School, I worked my way through the University of South Florida, while supporting a family–college was a lot more affordable back then!

However, my career from 1972 to 1991 was to be in the Sheet Metal trades, becoming a fabricator, welder, fabrication shop owner, and, finally, the Training Director for Local Union 49.

Through self training (while a single father of a toddler) and computerizing my own business in the late ‘80s, I became proficient as a database developer. In 1992, I changed careers, becoming a database administrator at CNL, Inc. Springs Industries hired me and relocated us here in 2003.

Since moving here, I have held positions on the Boards of the Community Playhouse of Lancaster County, Lindsey Pettus Greenway, NAACP-Lancaster Branch, and the Lancaster Housing Services.

In 2012 I became active in the Lancaster County Democratic Party, serving as a State Convention delegate and representative to the SCDP Labor/Progressive Caucus.

I worked as a volunteer coordinator for Senator Sanders’ campaign in 2015-16. At the County Party Convention in 2016, I was elected Chair by the local activists, reelected in 2018 and 2020. I also joined Our Revolution South Carolina and became the CD5 co-chair, working to build a permanent Progressive organization in South Carolina. 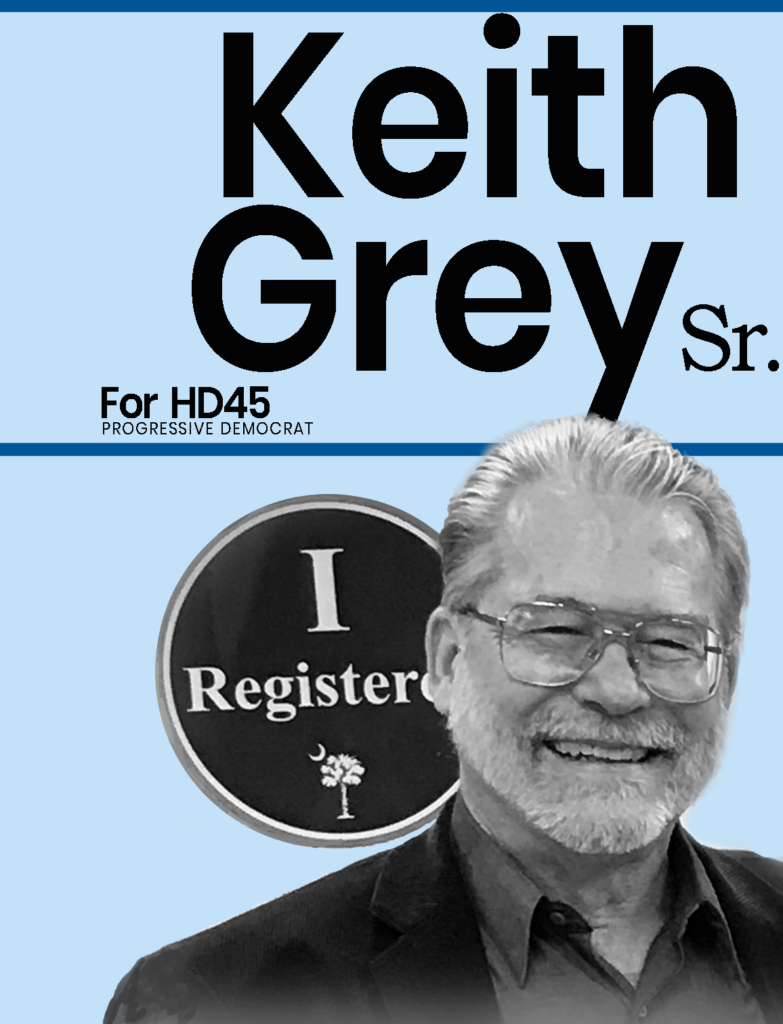 Now is a time to assess, recalibrate, and reclaim the terms of American political dialogue. Over the past forty years, Americans have watched as a narrow but powerful coalition has taken over our country’s government and conducted its business in ways that violate strong, deeply-held values that so many of us share. One of the most insidious aspects of the violence done to our values has been the Orwellian language that enveloped their misguided and malign policies in a deceptive, feel-good haze.

Today, the conservative political machine has run out of gas, and many of its theoretical underpinnings have proved bankrupt. A new coalition of voters is emerging in response. This can be a watershed moment for the progressive movement that has been fighting back for the last eight years. How will this new progressive coalition think and talk about the values that guide our policies, our way of government?

The results of this analysis distill the frameworks into three core pairs of values: Freedom / Security, Community / The Commons, and Truth / Justice. Each value pair speaks to a different realm of political life: Freedom / Security defines the opportunities and protections the government gives individuals; Community / The Commons describes the relationships among groups and shared resources; and Truth / Justice refers to the formal structures of language and law that mediate between individual and communal concerns. Rather than separate values, each pair describes a dynamic relationship that motivates progressive morality and ethics.

Freedom/Security
Freedom. Progressives value Freedom of choice, speech, religion, and self-determination. They believe that all people should be able to speak, travel, worship, and marry without governmental interference. Freedom extends also to the collective self-determination upon which representative democracy is founded.
Security. Progressives value the Freedom to succeed and determine one’s own life, but also Freedom from unjust imbalances and the vagaries of chance. Security is another form of liberty, but with an inverted focus: it includes Freedom from illness, hunger, violence, war, chance disasters, poverty, exploitation and ignorance. This is why progressives regularly promote policies that benefit emergency response infrastructure, public public health, access to healthcare, and social security.

Community/The Commons
Community. Progressives value people, human bonds, social structures, and communities characterized by creativity, equality, diversity, and a strong sense of mutual interdependence. It is this “mutuality” more than any other concept that differentiates progressive Community from conservative Community; rather than a strict defense of traditional authority, progressives, motivated by empathy and responsibility, emphasize that “we’re all in it together.” In contrast to conservatives, progressives value communities in which rules are questioned – in which the practical material demands of the present trump traditional hierarchies.

The Commons. The Commons are what we share, what no one can claim as private property and what all of us need to live healthy, happy lives. They include the environment, transportation and power infrastructure, the healthcare system, communications media and the broadcast spectrum, education, language, cultural heritage, and our representative democracy. Progressives recognize that all humans hold The Commons in common. To the degree that some individuals exploit The Commons more than others, or devote less labor to its preservation for present and future generations, they violate the moral imperative that results from the progressive value of The Commons.

Truth/Justice
Truth. Truth includes not only facts but also more generally a stance of honesty and integrity, transparency in government, and a strong commitment to reason. Rather than interpreting data according to preconceived ideological positions, even if those positions might support other progressive values, this value of Truth dictates a strong progressive desire for objective and rational analysis. Reason and accuracy, far from being only ideological concepts, are vital to progressivism’s pragmatic character.
Justice. Justice operates in the realm of the world as it is legislated and lived. Progressives believe that everyone should play fair, and that the terms of fairness derive neither from birthright nor from mere convention or tradition. Progressives gauge the Justice of a law based not merely on its effectiveness at advancing progressive causes or its acceptability within existing legal frameworks, but also and more importantly on the degree to which it makes rational sense.

The three core value pairs give progressives a way of talking about what unites the progressive movement, what progressives most essentially represent. As we move forward into the 2020 presidential election and beyond, progressives can communicate and instill these core values by framing the debate in these terms and telling powerful stories that unite people around a shared progressive identity.

It would be a mistake to reduce the value of values to votes. Each vote, even each election, is merely a means to make a freer, more equitable future. We must not confuse the ends and means. Political power is only worth something if we have a compelling vision to work toward. In this sense, the values listed here are not a tool but a statement of purpose, not a strategic initiative, but an image of the country progressives have said they want. These values, aggregated and distilled from the thoughtful hard work of so many devoted progressives, represent what we stand for, who we are, and what America can become.

For the full report, see: