I grew in a blue-collar environment in Orlando in the 1960s. I didn’t see my white privilege yet-I didn’t even have a classmate of color until I was in college. Our society has been very good at concealing the structural racism from white folks. Many have been too busy building careers and raising families to see the damage done to our Black brothers and sisters.

The white people of my community didn’t realize that the “Urban Renewal” and Interstate Highway programs of the ’60s directly targeted Black neighborhoods in the city core. White people were carefully told those were just the “run down” areas that would be rejuvenated. And white families never experienced the redlining that denied hard-working Black families the opportunity to build generational family wealth from homeownership.

My wake up call came while serving on a jury trial in Orange County, FL. when the Ocoee police had the nerve to expect the jury to railroad a young Black man at the obvious behest of a white drug dealer. An incident from my youth, when working for a roofing company, flashed in my mind: a roofing job in Ocoee required an all-white crew to be assembled as all the Black roofers refused to go there. I later learned there had been a rash of lynchings in the area just 10 years earlier.

The lynchings never went away — they have been taken over by the police in some areas.

One question comes to mind with all incidents recently recorded on cell phones: how many earlier acts of targeting and brutality will never be known?

To those that say “Well, it is just a few bad apples!”, I say if the culture keeps the “good cops” from speaking out, the whole culture must be changed! There must be accountability and consequences for harmful actions and management must be held responsible for their subordinates. In addition, financial penalties from civil lawsuits should NOT be paid by taxpayers. Finally, the militarized appearance and mindset has got to go! If the civil threat is serious, call in the State National Guard — that is their purpose!

We must seek justice with urgency. We must come together as South Carolinians and as Americans to create a free nation for all of us. We MUST live up to the closing words of our Pledge of Allegiance: “with Liberty and Justice for ALL.”!

Postscript: I originally had the following sentence in the above text:

‘I seriously suspect the fitness “to protect and to serve” of the thugs sent to attack the peaceful protesters of Lafayette Park.’

Turns out that the “thugs” were Trump’s Brownshirts from DHS–now THAT budget item should be totally zeroed out! 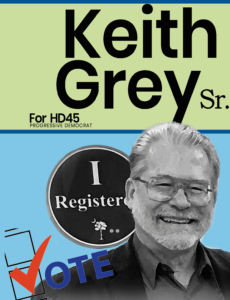 ABOUT
Keith’s Story
In 2012 I became active in the Lancaster County Democratic Party, serving as a State Convention delegate and representative to the SCDP Labor/Progressive Caucus.
I worked as a volunteer coordinator for Senator Sanders’ campaign in 2015-16. At the County Party Convention in 2016, I was elected Chair by the local activists, reelected in 2018 and 2020. I also joined Our Revolution South Carolina and became the CD5 co-chair, working to build a permanent Progressive organization in South Carolina.